Maker Park Radio: On The Air (And Not In A Closet) On Staten Island 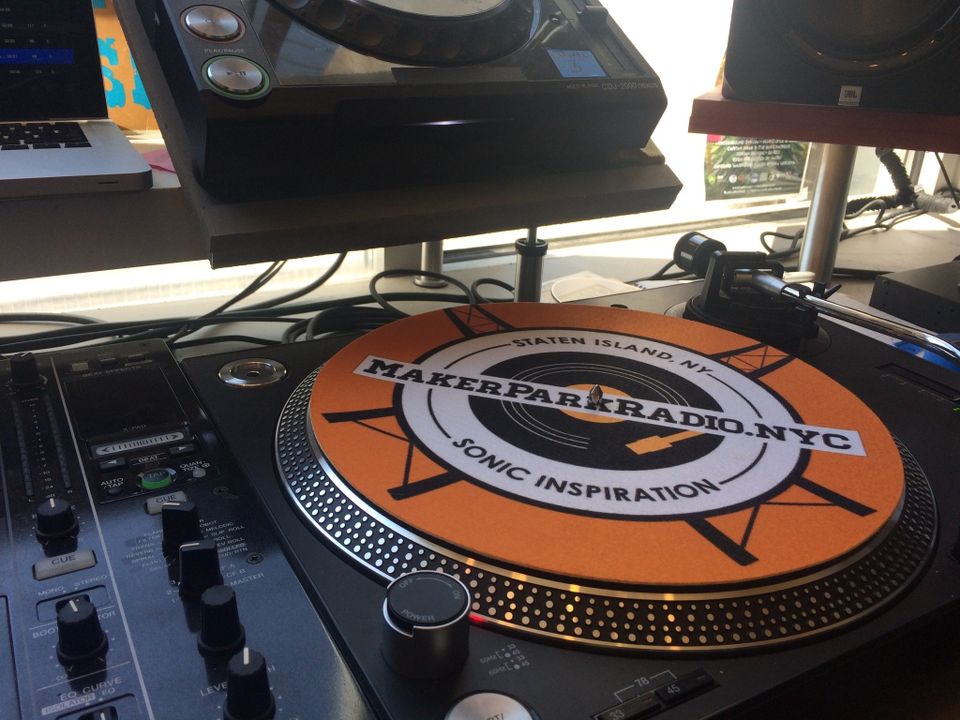 STATEN ISLAND, N.Y. — Big ideas are pumping out of a tiny space on the North Shore.

Thanks to the creative minds of Kristin Wallace and Tom Ferrie from Randall Manor, matched by a grant from Staten Island Arts via the NYC Department of Cultural Affairs, a new platform for the borough to express itself is just a click away.

MakerPark Radio launched over the weekend in Stapleton.

Contrary to some media reports, this is not some former closet space: It’s an internet channel broadcasting ambitious playlists of authentic Latin, rock, disco, house and “oldies” music — to name a few featured genres.

“My inspiration came from when I interned at LUMEN [Fest with Staten Island Arts],” Wallace said. “I would see thousands of people pouring in and it got me thinking about how I wanted to do something for this community.”

Point blank: “The community was there, if you only built it.”

The station, based out of Staten Island MakerSpace, overlooks its namesake across the street: Maker Park, located on the corner of Thompson and Front streets.

THE NEW KIDS ON THE BLOCK

To introduce themselves to the neighborhood, the MakerPark Radio crew threw a free listening launch party Saturday in the lot across the way.

Flagship Brewing Co. in Tompkinsville donated kegs and cans of beer to the event, along with 80 burritos provided by Ho’Brah Taco in West Brighton. Plus: 5050 Skate Park provided a custom-made sign to hang in the station’s studio.

Side note: Sources from MakerSpace say it took three-and-a-half years to get the lease for the lot next door and they plan on using the area for tons of outdoor workshops, activities and events this summer.

When it comes to the industrial surroundings, MakerSpace co-founder Scott Van Campen shares a clear message: “This is not a dumping ground. We make a lot of things over here and our goal is always to bring people together. Music should be something we could make here as well.”

Billed as a “passion project that could,” Maker Park Radio’s creators aim to unite a “community of artists, advocates and creators.”

LOTS OF HEART ON THE WAVES

What the studio lacks in physical sprawl, its inhabitants make up for in wide open hearts. Sure, the up-and-coming online radio station made its debut Saturday — but it’s been in the development process for months.

The station streams live video from inside the booth as DJs and talk show hosts play their sets. On their debut date, Maker Park Radio attracted viewers and listeners from England, Dublin and Puerto Rico, as well as Staten Islanders.

“The video component is to engage people watching online,” said Wallace. “It’s like they’re looking into the process and it, hopefully, makes them feel like they’re a part of something.”

NOW FOR THE TALENT

“Lak Nadha” is a Sri Lankan children’s show airing Sundays from 9 a.m. to noon. The goal: “To teach children the modern language and how to connect with their culture,” says show host Suranga Perera. (For the uninitiated, S.I. is home to the largest Sri Lankan population outside of, well, Sri Lanka.)

Here are some more show descriptions to help set the MakerPark mood:

Channels & Winds with Ray brings you an eclectic blend of today’s Bottom 40 hits from all major genres, from Reptilian Disco to Sock-Hop Soul. Ray, your host, will engage a menagerie of wide-eyed guests in conversation about music, art, politics, culture, garbage, anger, and other elitist intellectual pursuits that you’re sick of hearing about already.

Classical-ish with Nutmeg is an intrepid foray into the genre non-conforming outer edges of the classical universe, where women who make beautiful noise, non-Western modalities, sonic experimentation and composers of color are what’s happening.

Clave Caleidoscope: Nelson Gutierrez has been a professional trumpeter in New York City for over 35 years. He has performed with many Salsa and Latin artists like Larry Harlow, Jose Alberto “El Canario”, Celia Cruz, Ray Sepulveda and Tito Nieves where he was the Musical Director for over a decade.

This is his first venture into the DJ booth where he will play the music of his youth and music he grew to love. Clave Caleidoscope is on every Sunday morning from 10 a.m. to noon, playing lesser heard tracks of Latin jazz and salsa.

His sound is the result of a journey as a person and DJ, from his place of birth in Ukraine in 1981, as a skater kid in the ’90s listening to metal and hardcore through to the early 2000s when his ears were informed by the Staten Island roller rinks, with their disco and freestyle soundtrack, and the dance floors of New York bacchanals like The Tunnel, which were driven by heady blends of high velocity rave music and dark, driving progressive house.

Udachi’s show is on Sunday nights from 6-8 p.m.

Janicke, along with Brian Crowe from The End Studios at Kreischer Mansion, will be doing a show every other Sunday from 4-6pm.

Steve Piazza hosts a talk show “All About Food,” that explains the ethics and the science of cooking and the eating.

Two Drink Minimum is a show about beer and making stuff — whether that’s music, sculpture or just more booze.

You Name It with local musician Rory Merola is a multi-genre, depth-delving show harkening in to lesser-known music spanning the ’70s to the present. Disclaimer: You might learn something while enjoying the sounds.

MakerSpace is located between 450 Front St., between Front and Thompson. For more information, visit MakerParkRadio.nyc.